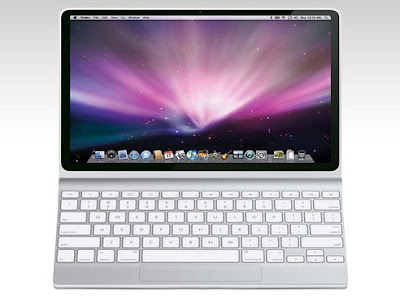 Apple rumored netbook on 3Q is cranking all-over the tech-community. Despite Apple execs stated that “netbooks as cramped and underpowered”, so if Apple were to release a netbook, it would likely end up being something innovative and implemented in a way that others haven’t thought of yet.

The re-emerging Apple netbook rumor fired-up when Digitimes reported Taiwan-based Quanta Computer will build a new netbook computer for Apple and from Commercial Times Wintek will supply touch panels for the Apple netbook.

Knowing Apple for innovations, it just looks like that the netbook will look as the longtime rumored 7 to 9 inch iPod Touch with a virtual keyboard. Ditching out the keyboard-screen design would set Apple netbook far ahead from the conventional netbook on the market.

Looking on the price, well it seems Apple netbook would cost around $600, in between an iPhone/iPod Touch and MacBook.

Apple already has a netbook
As we explained in January, the iPhone and iPod touch may already fill the space that would be occupied by an Apple netbook. The iPhone is a highly mobile device that lets you stay connected on the go, offering news, e-mail, the Web, and digital media, much like most netbooks. It arguably does so in ways that exceed other smartphones, as exemplified by the iPhone’s sudden and explosive presence on the Web in comparison to other mobile devices. For example, in February of 2009, the iPhone made up nearly 67 percent of mobile Web browsing worldwide according to statistics from Net Applications, and in February of 2008, Google said that searches made from the iPhone were 50 times higher than any other handset.

Those are some big numbers that show the iPhone’s unique position among the mobile world. So what would be the point of a netbook that somehow fits in between the iPhone and a normal Apple laptop? Netbooks are all about a particular kind of compromise: they greatly increase mobility at the cost of general usability. Let’s be honest, the people who are performing actual work on netbooks out in public are largely the exception, not the rule. If all you need is a mobile Internet machine, why not just use an iPhone?