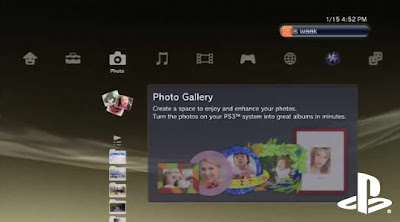 Yes, they say that the 2.60 firmware update for Sony PlayStation 3 is now available and ready for download. But the interesting part here it’s a whooping 140MB for a new Photo Gallery application and DivX 3.11 support .

The big thrust of the update is a new Photo Gallery app, which can sort by various EXIF data, but also the actual content of the image itself, including colors used, number of people in the photo, how old they are, and facial expressions they used when you pulled out your powdered-blue Kodak to take a few historical snapshots. Naturally you can build slideshows with music and the like.

Sony’s also adding with this update guest access to the PlayStation Store and DivX 3.11 support. If that’s not enough magic to get you riled up, Sony’s also pushing out a PSP update, firmware 5.03 that addresses “security vulnerabilities” and some stability issues.