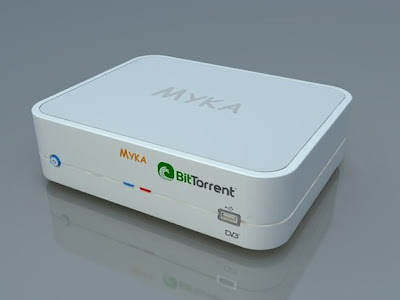 The recession downfall affects even the production of greats gadgets like the Myka, it’s a BitTorrent player the pull torrents directly from the Internet and plays them on a television sets. Myka comes in three variations which defends in hard drive sizes 80 GB ($299), 160 GB ($349) and 500 GB ($459).

It was supposed to start shipping last summer, but the Boston-based company ran smack into the economic crisis and couldn’t get the financing to start production. Now, Myka reports that the first shipments are four to six weeks away. While a torrent-box seems like an enabler for pirated content, there are plenty of free and legal things to watch, plus the company says it’s in talks with studios and networks to bring in rich content.

Since the internet is really a rich network of free, legal or illegal torrents it’s just a way to bring it to you is a more convenient way. And Piracy is in the blood of the Net, with millions of illegal software around, where will you start to stop it?