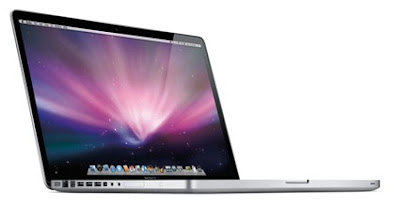 Apple® today unveiled the new 17-inch MacBook® Pro featuring a durable and beautiful precision aluminum unibody enclosure, and a revolutionary new built-in battery that delivers up to eight hours of use and up to 1,000 recharges for more than three times the lifespan of conventional notebook batteries. The new 17-inch MacBook Pro has a high resolution LED-backlit display and the same large glass Multi-Touch™ trackpad introduced with the new MacBook family in October. In addition, the new 17-inch MacBook Pro includes state of the art NVIDIA graphics and the latest generation Intel Core 2 Duo mobile processors. As part of the industry’s greenest notebook family, the new 17-inch MacBook Pro is made of highly recyclable materials, meets stringent energy efficiency standards and is made without many of the harmful toxins found in other computers.

Apple uses advanced chemistry, intelligent monitoring of the system and battery, and Adaptive Charging technology to create a revolutionary new notebook battery that delivers up to eight hours of wireless productivity on a single charge and up to 1,000 recharges without adding thickness, weight or cost to the MacBook Pro’s incredible design.* The longer battery lifespan equals fewer depleted batteries and less waste, which is better for the environment.
The new 17-inch MacBook Pro includes an ultra-thin, widescreen glossy 1920 x 1200 display with 78 percent more pixels than the 15-inch MacBook Pro and a 60 percent greater color gamut that delivers desktop-quality color in a notebook. The LED-backlit display has brilliant instant-on performance, uses up to 30 percent less energy and eliminates the mercury found in industry standard fluorescent tube backlights.

The new 17-inch MacBook Pro will be shipping at the end of January and will be available through the Apple Store® (www.apple.com), Apple’s retail stores and Apple Authorized Resellers for a suggested retail price of $2,799 (US), and includes: