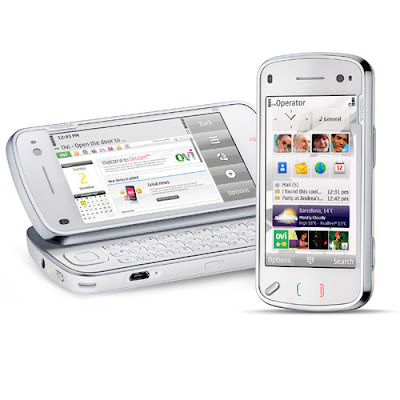 As I stares at my PC watching how the countdown melts at its own waiting for the biggest thing Nokia promised, then at the moment it hits 0000:00:00 nothing happen. Then I’ve checked the site again, few refresh still nothing happen, then I take my coffee break, when I’ve checked it again, it said that the “Site is too busy”, then I make a refresh, then the site opens which said: “Welcome to Nokia World 2008”.

Then now I can said it’s really BIG. Please read the Live Feed Content below. A whacking N97, which I said nothing have been rumored before. I think Nokia really pulled the BIG thing they’ve promised.

“From the desktop to the laptop and now to your pocket, the Nokia N97 is the most powerful, multi-sensory mobile computer in existence”

BARCELONA, Spain – The N97 isn’t a device that will trigger knee-jerk hysteria, but instead it should breed cool-headed excitement at the prospect of a new era of mobile experience.

It may be an Nseries handset, but the N97 carves a new space in the otherwise blurred realm between smartphone and laptop – a product built on a foundation of rock solid mobile principles, Nokia innovations, and tangible new technologies, pushed to the extreme and embodied in a slimline pocket shell.

Just as the original N95 re-shaped our perceptions of what’s possible with a mobile device, the N97 again raises the bar beyond the reach of its peers by equipping us with a product that fuses the best proven Nokia hardware, software and Internet services, blended with a new flavour of design, ergonomics and usability.

Read on to explore the N97’s full list of talents.

The most physically immediate stand-out feature of the N97 is its kick-out full QWERTY keyboard, hidden behind a 3.5-inch widescreen 16:9 touch display that tilts smartly above the keys. Both control methods neatly coexist and are tailored to ensure every experience, be it messaging, social, entertainment-focussed or otherwise, are manageable via the most instinctive physical toolset available. The touchscreen promises to be exploited to full effect, even when inactive, courtesy of a new homescreen that automatically sucks in live information via custom widgets sat on a S60 5th Edition backbone.

The N97 enters the fray stomaching 32GB of on-board storage, double that of any mobile device currently in existence, and can take up to another 16GB via microSD, enabling it to become a portable multi-media computer with 48GB in your pocket. Of course Nokia wants you to abuse this space with music, movies, photos and N-Gage games, and as such has worked hard to ensure the N97’s battery is up to the task – it promises to kick out up to 37 hours of music and 4.5 hours of video.

Embracing location based services and the concept of context awareness, the N97 is location-savvy, automatically sensing where it is at any given time via A-GPS. The benefit being that you’ll be able to tap into local services with ease and share your social location with friends minus any extra fiddling or fuss.

Other key talents include a 5 megapixel camera with Carl Zeiss Tessar lens and dual LED flash, GPS, HSDPA, Wi-Fi, USB 2.0, stereo Bluetooth and a 3.5mm headphone jack.
Jonas Geust, Vice President, heading Nokia Nseries, had this to say about it:

“From the desktop to the laptop and now to your pocket, the Nokia N97 is the most powerful, multi-sensory mobile computer in existence”

What do you think? Leave your comments below.