Skip to content
TechGeeze > Poll: “The Dream Match” or a “The Dream Mismatch” Pacquiao vs. De La Hoya 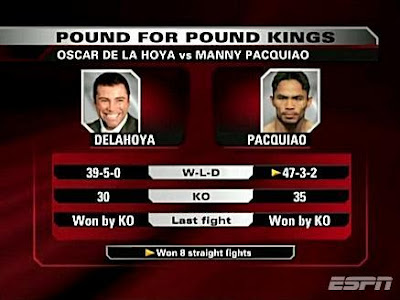 The biggest boxing match in years is finally set. “The Dream Match”, Oscar De La Hoya, boxing’s box office superstar in the past decade, will take on Manny Pacquiao, boxing’s hottest commodity today, in what promises to be a $100-million welterweight bout on Dec. 6 at the MGM Grand in Las Vegas.

It will be De La Hoya’s farewell fight and Pacquiao’s biggest ever. At any rate, observers believe the fight could easily rival the blockbuster encounter between De La Hoya and Mayweather last year which reportedly grossed $120 million, including the pay-per-view buys which generated a record $2.4 million. Pacquiao stands to get his biggest paycheck ever estimated at $15 million.

Considering all boxing aficionado and experts this an attractive as the prospect of seeing these two greats go at it may be, these are not solid statistics on which to build a good fight.

Both boxers must make physical sacrifices for the 66.5-kilogram (147-pound) bout, with De La Hoya dropping down to welterweight for the first time in seven years while Pacquiao bulks up to the heaviest weight of his career by far.

Dela Hoya may be the bigger fighter but don’t forget he has to make the weight at (147) so if De La Hoya doesn’t make the weight through training and a good diet, he’ll have a hard time with sweating it out in the last minute. Making that weight in the last minute will take away some of his stamina as well as power at the same time it makes Pacquiao’s punch more effective.

We’ll just have to see if the reach and height advantage as well as boxing skill of De La Hoya can out class Pacquiao. Since Pacquiao routinely puts on 4 kilos (10 pounds) or more in the 24 hours between weighing in for his bouts and actually stepping in the ring.

Pacman has really improved his boxing skill in his fights that started his career at 106 lb. He has won four titles in four different categories, snatching the lightweight title from David Diaz last June.

In my opinion the both fighter has advantages which negates or cancelled out each other disadvantages. Pacquiao is gaining weight which may affect his speed while De La Hoya is loosing weight which may affect his stamina and strength. De La Hoya’s reach and height advantage may be cancelled out by Pacquiao’s youthful strength and speed, taking on the side on agile infighting. I put it at the early rounds advantage to Dela Hoya but the later round to Pacquiao. If the fight goes beyond the middle rounds Pacquiao may have a chance at a knockout although a KO can come at anytime from either man.

It is just more than a month before a fight, and I just want to know from you, what is your prediction? Please join the poll watch and be part of the considered history in the making boxing match.