Skip to content
TechGeeze > Get Excited Windows 7 Features Upgrade
After taking a quick research and walk-through on how the Windows 7 are rated in the net I solicited some great features to incorporate in this post. Comparisons are made on both Windows platform XP and Vista. Here are the rundown of the features user have noticed to make a difference in the previous OS version. 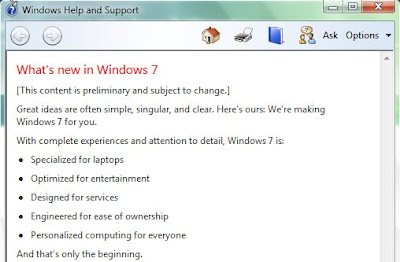 Better wireless home networking.
Connection switching only requires two clicks and it can be done right from the system tray icon. Windows 7 also detects three more access points near my home than XP and Vista.

Built in Troubleshooting.
A computer that is self healing would put programmers like me out of a job. Imagine a computer that self diagnoses it issues, fixes them, and gets along its way.

Updated Core Applications
An improved interface and functionality of Paint, Wordpad and Calculator.

Device Stage Management.
Device Stage will improve integration with cell phones, PDAs, personal media players, cameras, and more – and it’s a sign that Microsoft is more concerned about simplicity and ease of use than they were with Vista.

Image backup system.
It’s here, and is an amazingly simple way to back up your system to a networked or external hard drive. Windows will even create a bootable restore/rescue disc and it remember the location of your last backup – making the restore process dead simple.

Desktop and Window Management.
Windows 7 has some really cool features including Snap to Docking, Aero Shake, an Updated Taskbar, Jump Lists, and Gadgets wherever you want them.

The new taskbar.
There have been a number of improvements, including re-ordering icons, better visual task tips, and a more customizable system tray. Windows Media Player’s tip view even provides basic playback controls automatically – no need for a special taskbar mode. The icon only mode is also a welcome change: it helps reduce taskbar clutter and pinning simplifies access to my favorite apps.

PC Safeguard.
Windows 7 has taken restricted user accounts to the next level: by enabling PC Safeguard, you can force all changes a user makes to be discarded at log off. That means shortcuts, downloads, documents, temp files – everything just disappears. It’s easy enough for the average home user to configure, and provides an additional layer of defense against malware and reckless computer use.