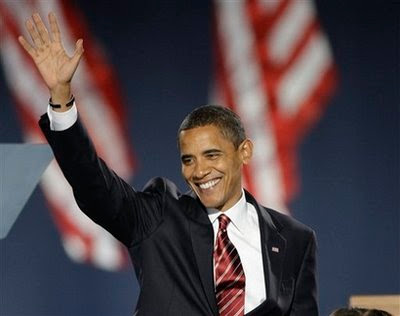 Barack Obama is vowing to be a president for all of America, even those who voted against him. He swept to victory as the nation’s first black president Tuesday night in an electoral college landslide that overcame racial barriers as old as America itself. “Change has come,” he told a huge throng of cheering supporters. The president-elect cast his election as a defining moment in American history and an answer to cynicism, fear and doubt about the power of democracy.

The son of a black father from Kenya and a white mother from Kansas, the Democratic senator from Illinois sealed his historic triumph by defeating Republican Sen. John McCain in a string of wins in hard-fought battleground states — Ohio, Florida, Virginia, Iowa and more.

On a night for Democrats to savor, they padded their majorities in the House and Senate, and come January will control both the White House and Congress for the first time since 1994.

In his first speech as president-elect, Obama catalogued the challenges ahead. “The greatest of a lifetime,” he said, two wars, a planet in peril, the worst financial crisis in a century.”

His victory speech was delivered before a multiracial crowd of more than 100,000 people. Many cried and nodded their heads while he spoke surrounded by clear bulletproof screens on his left and right.

He sprinkled his address with references to the civil rights struggle that has led to him being elected the country’s first black president.

To those who voted against him, he said, “I will be your president, too.”